A long-standing passion for wine has resulted in film producer and director Malcolm Walker initiating the construction of one of the UK’s newest wineries, Itasca Wines.

Having enjoyed drinking wine since he was a teenager, Malcolm’s interest in the beverage has spanned the length of his career in the film and television industry, which started when he left school in the mid 1970s and saw him work on big films like Star Wars and Alien and some of the UK’s most popular TV series.

After becoming “fed up” with the plethora of cooking programs on TV on “every channel from every country” compared with the very few on wine, Malcolm decided to do something about it and in 2011 his production company, Itasca Films, began shooting the first episode of Cellar Rats, a documentary series about winemakers from around the world. Beginning in Australia, subsequent episodes have been filmed in Spain, Portugal, South Africa, New Zealand and, eventually, the UK.

“To be honest I hadn’t drunk a lot of English wine,” Malcolm admits. “I was amazed at how the UK wine industry had taken off over the last 6-7 years. We were drinking some really nice, mostly sparkling wine. The UK wine industry really has a foothold in world wine now.”

Itasca Films rents premises on the property of Penn Croft Farm, a 530-hectare estate in Crondall, Hampshire, about an hour’s drive south of London. After the country’s major wine regions of Kent, Sussex and Surrey, Hampshire makes up the remaining recognised vineyard areas of England along with East Anglia and South West England.

Malcolm was in the carpark at Penn Croft Farm early one morning when he ran into farm owner Simon Porter. Simon wasn’t yet aware that his tenant had an interest wine and the conversation quickly turned to the subject. It was to prove a serendipitous meeting because not only had Malcolm been debating about putting his money where his mouth is and planting his own vineyard, but Simon had been contemplating planting some vines himself.
“Simon said, ‘why don’t we do this together? I’ve got the land but you’ve got the knowhow, the contacts and the means to raise the money’,” Malcolm recalls.

Planted nearly two years ago, the Penn Croft vineyard contains 9500 vines across four hectares comprising Chardonnay, Pinot Meunier, Pinot Noir and Bacchus — the latter a German hybrid that has proven to be a reliable producer in the cool climes of England and makes a wine style similar to Sauvignon Blanc.

When news of the Penn Croft vineyard spread, other local wine producers began asking Malcolm and his team if they had any wine storage facilities.

“Storage facilities are every winemaker’s problem, especially with sparkling wine which matures in bottle for a couple of years,” Malcolm notes. “I then started investigating how many vineyards there were in the UK and what the storage capacity was.”

A survey carried out in 2019 by Wines of Great Britain, the body that represents the grapegrowers and winemakers of England and Wales, found there are about 770 vineyards over 0.10 hectares across the two countries and approximately 165 wineries. Malcolm says that of the latter, only a dozen or so offer contract winemaking services.

“We could see a commercial opportunity for a dedicated contract winemaking service which would help cover the cost of producing our own brand.

“When I suggested to [Simon] that we look at establishing a contract winemaking service, he happened to have two old rusty barns on the property that hadn’t been used for 10-15 years. So that was the ideal location given our long-term plans of a restaurant, café and cellar door, so we knocked down the barns and built our winery.” 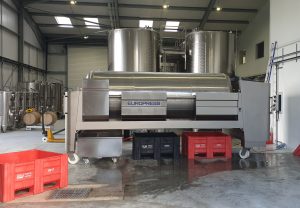 Construction of the 1000 square metre winery began in February 2020 and was open for business by September the same year for its first vintage. The Itasca Wines crew, under the guidance of winemaker Ben Smith, processed 150 tonnes of fruit in 2020, including for 11 clients. They also processed about 20 tonnes of grapes bought for the Penn Croft label — mostly Chardonnay and Chenin Blanc for still wine — and some Pinot Noir for a rosé. Those wines are due for release in June 2021.

Just before Christmas Itasca Wines took delivery of 100,000 bottles. A bottling plant is due to arrive in mid-January 2021 followed by a fully automated disgorging line in February.

“With the tanks we’ve got in at the moment we could probably do up to 400 tonnes. We’ve been signing up clients even since harvest. We’re probably looking at hitting 200-300 tonnes next year,” says Malcolm.

The Itasca Wines team soon realised they would need a robust system for managing the various batches of wine it would be processing for its clients. Malcolm and Itasca’s technology manager Tony Gallagher set off in search of such a system which led them to vintrace.

“I noted it was Cloud and mobile based for both android and iPhone,” says Tony, picking up the story. “Malcolm, being in films, loves all things Apple and Mac. I prefer Windows and android; it is a running battle between us. But vintrace covered both so it was ideal.” 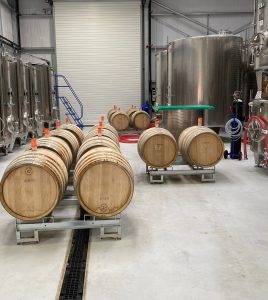 When head winemaker Ben Smith joined Itasca, although he hadn’t personally used vintrace before, he’d certainly heard of it and knew of fellow winemakers using it.

“Ben, having come from a world of spreadsheets and paper, knew that vintrace is what a state-of-the-art winery needed,” Tony notes.

While Ben was happy for vintrace to help manage the making of wine at Itasca, Tony has been more interested in using it to track costs per client.

“From the finance side it is desperately important that we track the costs of every item and every operation to know where we are falling short on recovery.

“If you can measure it, you can manage it. vintrace is our tool by which we are measuring and managing that cost recovery, identifying waste and opportunities to improve efficiency.”

“If I was asked, can you comment on how good you’re finding vintrace, I think myself, Tony and Ben would say it’s their open approach and adaptability to try and work with customers and develop solutions that’s most impressive,” Malcolm says.

“The other thing I really like about vintrace is when you look at it and you see the way the process flows you know it’s been designed by someone who knows their subject.”