Torbreck Vintners, Darling Wines and Tasmanian Vintners Discuss Having The Power of Productivity in the Palm of Your Hands

This is a summary of our webinar:
“Supercharge Your Winemaking with Technology and Automation.”

When you think of automation in wineries, you tend to picture technologies that reduce the need for humans — tank temperature sensors, smart pumps, wine barrel filling systems, automated bottling lines, and the like.

However, improving production efficiency in wineries can be achieved without sophisticated technologies and involve something as commonplace as a mobile phone or tablet.

Automatically recording tank temperatures or laboratory analyses in a single electronic database to trigger the issuing of a cellar note for the next step in the winemaking process is just one such example. A recent webinar conducted by vintrace explored the benefits of this type of automation. Hosted by vintrace’s Jamie Gilchrist, the webinar featured winemakers Ian Hongell, of Barossa Valley-based Torbreck Vintners, and Chris Darling, of New Zealand-based Darling Wines, and Wolff Fiedler, systems coordinator for Tasmanian Vintners.

While vintrace started as a computer-based winery management system, it has since become available as an app for mobile phone and tablet use, which has risen significantly as wineries implement restrictions to slow the spread of COVID-19.

“We saw a huge uptake in the app usage for vintrace,” Gilchrist said. “One thing I found interesting is that people were using their mobile devices to reduce the need to sanitize clipboards, pens, and paper shared across the cellar crew. Everyone prefers to use their own device [phone or tablet] instead of a community device.”

In recent years, Gilchrist said the application of vintrace across wineries had evolved from a record-keeping system for compliance or export approval to assisting winemakers with daily decisions. One winery introduced who uses vintrace was Torbreck Vintners.

Ian Hongell explained that although Torbreck Vintners doesn’t utilize a lot of automation in its winery, vintrace has led to improved efficiencies. Cellar staff enter readings, such as Baume levels, directly into vintrace, and record each press load when completed. This practice enables the winemaking team to check on the progress of any given fruit load.

“This helps us with proactive planning [as we can see] what’s ready to press off and allows us to schedule the amount of staff we need. It is straightforward technology; it’s in your hand, and you can see it,” Hongell said.

The ease of issuing worksheets for cellar hands via vintrace is also valuable.

“We started with an Excel spreadsheet. At the end of the day, one of the staff would sit there for two hours and update [all the worksheets] manually. Now, it takes about 15 minutes to set up the next day’s work. We went from walking out and saying, ‘shift this wine here and here and I’ll be back later with a worksheet, just get it started’ to, ‘here’s your worksheet’.”

Hongell said Torbreck’s utilization of both paper and electronic worksheets issued via vintrace had led to fewer errors around the winery.

“When you update a worksheet, you can see losses, so you’re prompted to investigate if something doesn’t seem right. Our rule is if it doesn’t look right, it isn’t right, [so] go out and recount, re-dip or look for a spill or something like that; look for a barrel or a tank that should have gone in, all those sorts of things.”

Torbreck is also making use of the vintrace app in vineyards.

“If I’m in a vineyard and I’ve got a grower with me in a block, I can stand there and book [the fruit for harvest] on my phone. That’s downloaded immediately to our calendar, and programmed so we can prepare our fruit receival.” Hongell said this avoided the possibility of a load of fruit turning up at the winery unexpectedly. 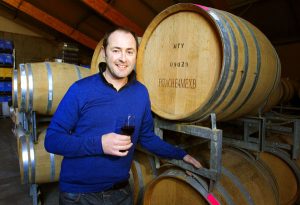 Chris Darling, of New Zealand-based Darling Wines, never made it out into a vineyard, nor sampled a ferment during the last vintage. While he usually would commute between South Australia and the winery in New Zealand, restrictions on international travel brought about by COVID-19 meant that it was no longer an option. Still, with access to vintrace on his phone, in particular, he was kept abreast of everything that was happening remotely.

“This vintage has been one of the most challenging and different I’ve ever gone through. I run a wine company in New Zealand [but I’m] based in South Australia and was looking to go back and forth to New Zealand regularly. But obviously, that changed about a week before vintage, and I wasn’t able to get on a plane,” Darling recalled.

While his New Zealand-based business partner was able to supervise the tasting of grapes and ferments during the vintage, vintrace kept Darling up to speed with “all the numbers”.

“Rather than getting reports sent to me, I found it great to be able to log on anytime and find out what’s going on, especially through the app. Like, if a cellar note is waiting, or if I request an analysis, I can see if it is being done. If a racking’s been done, I can see if there’s any balances that need sorting out.”

Formerly employed at a larger NZ winery that used vintrace, Darling now appreciates its application in a smaller setting.

“It saves so much time just having your [tank] temperatures imported into vintrace. And you can do it at a certain time of the day as well. If you’re doing your ferment rounds in the morning, you can get your temperatures to upload just before that; then you know in real-time what’s going on.”

Darling explained that while employed at the larger NZ winery, winery processes were mapped to identify where automation, including vintrace, could improve efficiency.

Likewise, finishing notes could be standardized and automated using vintrace.

“We would have templates set up for additions for finishing a ferment. You’d type in your tanks, and it would just fill out all the additions for you. You could write 10 or 20 finish notes in about a minute if you really needed to.” 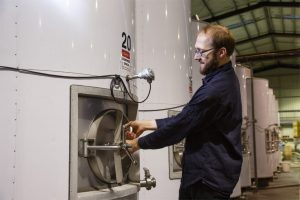 Saving time in recording data and then using that data to save even more time has been the main gain from vintrace for Tasmanian Vintners, a contract wine facility located in the outer Hobart suburb of Cambridge.

“In one of our bigger vintages, we had 170 ferments,” Wolff Fiedler explained. “At some stage, we would have to do the temperature entry for them all manually in whatever program we were using at the time. But now we have automatic sensors that read these temperatures, send the temperatures to a server which runs the software, and then vintrace reads this software and automatically imports it. That can save, in a big vintage with lots of ferments, potentially an hour a day of data entry.”

Fiedler said one of the most significant advantages of vintrace is the ability to schedule wine analyses.

“You can say, ‘I want this analysis to be done in two weeks and then again in six weeks’ or something like that. We’ve also trained more people to be able to update the work notes. We’ve probably got about close to 30% of our staff now able to do this, which means you can have these work notes updated really fast by winemakers, laboratory staff. You want to have your work orders updated fast so you can then get the most out of your analysis.”

“People are using their mobile devices to reduce the need to sanitize clipboards, pens, and paper shared across the cellar crew.”