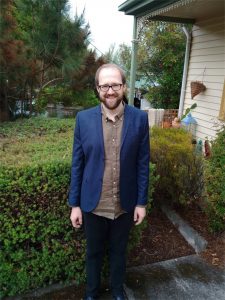 Tasmanian Vintners’ technical assistant Wolff Fiedler, a trained microbiologist who joined the team in 2013, said the company had some 40 clients during the 2019 vintage and made around 150 SKUs. Fiedler said during one of its biggest vintages, the contract crush facility processed nearly 1500 tonnes. He revealed the company intended to roughly double its capacity, although the exact scale and timing of this increase was still in the planning stages.

To manage the large volume of clients and their wines, the winery management software, vintrace, plays an important role in tracking the grape to the bottle. “The company installed vintrace at the end of 2016,” Fiedler recalled, replacing a previously installed system that was not meeting the company’s expectations particularly in terms of its ability to trace grapes from crushing to the finished product. “It was not accessible remotely and there were a lot of records that you could not easily tie to a wine batch,” Wolff said.

Fiedler went on to state that with the facility sometimes processing up to 240 different parcels of fruit, vintrace’s ability to track each parcel easily has been particularly valuable. “vintrace automatically takes information out of the system, like your vessels, your batches, and the additives you have in stock. For example, you can tell vintrace to look up the temperature of a particular tank and have it recorded on the printed template.”

“vintrace also ties into [tank temperature control system] Vinwizard and automatically reports temperatures which save half-an-hour to an hour of manual work every day,” Fiedler explained. “vintrace can automatically pull that information and create a record. That is fantastic.”

A couple of years ago, the winemaking team began to take advantage of the vintrace app features, placing barcode stickers on barrels which can then be scanned by smartphones via the app, enabling its winemakers to instantly record tasting notes on each.

Fiedler also said he has been impressed by the responsiveness of the vintrace developers to customer feedback, citing a couple of firsthand examples. “We have so many batches of wine being processed at once – we can do an ullage round for 100 batches at a time. And, initially, as all those cellar notes were being updated, the system would time out. But [vintrace] listened to our needs and made a few improvements so that doesn’t happen anymore.

There was also a time that if we made a mistake entering a record at fruit intake, you had to do a rollback of all the operations back to the point where the mistake was made. Now they’ve updated the software so that you can fix those errors very easily whilst keeping all the traceability intact,” Fiedler concluded.

“vintrace can save, in a big vintage with lots of ferments, potentially an hour a day of data entry.”