Perched on top of a mountain between Rome and Naples, I Ciacca has been lovingly restored after lying dormant for the last 50 years. Third-generation Italian-Scot proprietor, Cesidio di Ciacca put his family's 500-year heritage back on the map, turning the historical family vineyard into an organic wine boutique combining state-of-the-art technology with Italian winemaking tradition. 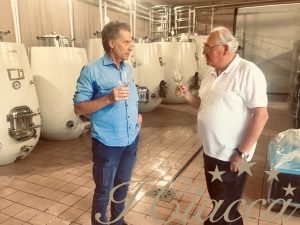 I Ciacca produces several varieties of organic wines and olive oil, but their passion lies in reviving a native white variety called Maturano. While the grape was historically grown in the area, cultivation ceased in the late ’60s except in a few small garden vineyards. Cesidio’s commitment to bringing Maturano back to life has marked a turnaround for a wine that could have easily been forgotten forever.

While the winery is small, the complexity of I Ciacca’s undertaking is multidimensional in their desire to pay tribute to history while remaining true to their organic wine philosophy. Being committed to operational efficiency and technology has been key, with vintrace being the door to success. Here’s their story.

I Ciacca is located on the slopes of the second-highest mountain of the southern Apennines in a  sub-region that made wines for hundreds of years.  A book published in the mid 15th century stated that Italian wines from this region were some of the finest in the country and aged exceptionally well.  Sadly, the area was abandoned as a grape-growing region over fifty years ago.

To restore the family estate and vineyard, Cesidio acquired 240 small parcels from 140 separate landowners, for which he planned to grow Maturano.  He took cuttings to the world’s leading grape ampelographers, who determined Maturano was unique and not linked to any known grape variety. Having no identifiable parents suggests that both are already extinct. 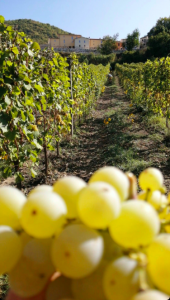 The challenge, as Cesidio explains, is that between the region and the Maturano variety, “everything is at once historic and new.” I Ciacca’s viticulturists had to learn how to prune, thin and harvest an ancient variety of grape where none have grown in modern times. Winemakers have had centuries of experience perfecting Cabernet, Chardonnay and Pinot Noir, but as Maturano had almost disappeared over the last half-century, the method to produce optimal wine was largely unknown.

This is where operational efficiency became a crucial component of I Ciacca’s success. To learn how to make exceptional Maturano, they needed to keep detailed records of their winemaking. Cesidio’s team started in 2017 by making many experimental lots and kept handwritten notes for their records; however, it didn’t take long for Cesidio to realize that the collection of lab books, scraps of paper and spreadsheets were insufficient. Some were written illegibly or were incomplete, other records were lost, and it was near impossible to organize the data into a valuable database. He needed something powerful, easy to use and fast.

Remote access to winery data was another challenge to overcome, as Cesidio often split his time between Scotland and Italy. The head winemaker also required remote access as he spent a lot of time off-site, traveling between his home in Naples to the winery and to the nearest enological lab, which is 100km in the opposite direction. Furthermore, I Ciacca employs the consultancy of Alberto Antonini, one of the most influential global wine consultants from Italy, and Cesidio’s daughter and son-in-law are part of the business but are based in Scotland. 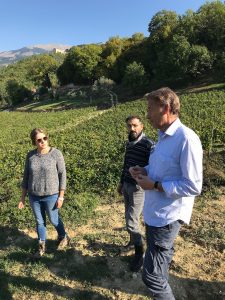 After careful consideration, I Ciacca chose vintrace in time for the 2020 harvest. vintrace winery software can record and retrieve unlimited amounts of production and lab data and quickly incorporate vineyard and winery observations such as vine photographs or wine tasting notes. vintrace’s European staff assisted with the onboarding process, ensuring the team received in-depth training to optimize their software investment. iPads were supplied to the winemaking team, with all prior lab and production data loaded.

I Ciacca now have comprehensive baseline data, such as harvest dates, tonnage, Brix levels, fermentation rates and temperature, and can also review by lot skin contact time or use of stems and stalks in the fermentation tank. Tasting notes are logged and retrievable in real-time by anyone anywhere, whether at a desktop PC or using the vintrace mobile app.

To maximize vintrace’s capabilities, I Ciacca barcoded their tanks to track the entire history of wine batches. The winemaker can review lab analyses done at the off-site lab, create work orders remotely and share tasting notes with the consulting winemaker, who can review and reply from anywhere in the world. Cesidio can track business operations and create and manage work orders regardless of whether he is in Italy, Scotland, or on a sales trip.

The team based in Scotland can easily manage the business’s finished goods inventory remotely. I Ciacca’s production is separated across several buildings in the village, so vintrace comes in handy to track the location of Cesidio’s barrels, tanks, finished goods and packaging. The simplified inventory also “provides records to keep the authorities happy,” says Cesidio. The extensive data recorded in vintrace is also used to accurately register and comply with ICEA organic certification and to report into SIAN.

From 2021, Cesidio will use vintrace to record notes from vine experimentation and track metrics, and store photos of vines maladies such as bunch rot.

“vintrace makes a compelling case for a small wine business. When you have a new grape, region and winery, collecting data is key. Now that I can track what happens year on year, I can build on that for future vintages. Perhaps vintrace’s most significant benefit is how it frees up time away from data entry and retrieval used for winemaking decisions. We shouldn’t use our time to be doing things better done by machines.”

Learn how vintrace can help you