We caught up with Weilong Wines Winemaker and Cellar Manager Aaron Milne in the middle of the 2021 Australian vintage to see it in action. We expected to walk into the usual vintage chaos but what we found was quite the opposite.

A few members of the vintrace team drove 6 hours north of our head office in Melbourne to visit Weilong Wines during the 2021 Australian vintage. Weilong Wines is nestled on the edge of the Australian outback, near the famous Murray River in the Victorian town of Mildura. Boasting a Mediterranean climate and warm weather, Mildura is home to around 20% of Australia’s vineyards, with 800 growers spanning 15,000 hectares. The region is also a major producer of citrus fruits and table grapes.

Weilong Wines has about 600 hectares under vine, and its primary business is producing red and white bulk wine for export to China. The company has experienced extraordinary growth since its inaugural 3,000-tonne crush in 2019. By 2021, Weilong crushed 19,000-tonnes of its 20,000-tonne capacity and is preparing for further expansion.

Weilong Wines, an established wine brand in China, expanded its business into Australia in 2016 by purchasing vineyards. Australian wine carries a status symbol in China and has quickly become Australia’s largest wine export market. Due to consistently producing high-quality wines, Australian bulk exports are often blended with local labels for premiumisation in the Chinese domestic market. Weilong established its Australian wine supply in 2018 by constructing a large facility in Mildura. Since its first vintage, continued investment has seen Weilong’s crush expand by more than 560% in three short years.

Aaron Milne – a seasoned wine professional and businessman – was brought on in 2018 to advise on the $100m investment of Weilong Wines Australia. As an integral part of the Australian leadership team, Aaron needed to ensure that the operational processes and production flows were flexible and designed for optimal efficiency from day one.

Adopting winery software was an obvious investment to digitally record and capture every facet of the business, develop strong cross-functional communications and ensure success every season. While the team was new to vintrace, they went with a recommendation from the engineering team and onboarded vintrace winemaking software from the first season.

“What I loved about vintrace from the start was the ability to design how Work Orders are presented to suit our operations. If something needs to be adjusted, I simply jump in and update it.”

The winery itself is an impressive feat of engineering, built for performance through a continuous flow method rather than a more traditional batch approach. During the Australian vintage, a constant stream of road trains delivers fruit, which is weighed and recorded directly into vintrace before being tipped into the crusher. While the next semi trundles onto the weighbridge, juice from the previous crush is filtered and pumped out into one of more than 200 tanks onsite. This continuous process ensures that around 1000-tonnes of fruit is crushed per day.

Aaron’s guide to zen during the Australian vintage

Aspiring for tranquility during the Australian vintage sounds like a fantasy. An entire year of grape growing and vineyard management funnels into a few months of organised chaos when the winery is abuzz with action. “It all comes down to effective planning,” said Aaron; however, the last 12 months have been more unpredictable than usual with bushfires, drought and a global pandemic. Furthermore, the direction from their Chinese head office was to double production for the 2021 vintage.

“I was nervous about how we would cope and thought that if there were ever a time to expect mayhem, this would be it.”

However, vintrace made it easy for Aaron to plan for a potentially complex season. He created shortcuts to repetitive functions and set up compliance processes to save himself time and money when the HACCP audit came around. “No more time-wasting rifling through boxes of paper and handwritten notes,” he said, “it’s all scanned and attached in the system.”

During our visit to Weilong Wines, the level of organisation and planning was immediately evident, along with an overall sense of serene productivity. Aaron attributes a hand-picked team and using top-of-the-line winery equipment and software to succeeding against the odds this vintage. He mused that “vintrace contributes significantly to maintaining a relaxed, zen environment.” The software connects seamlessly with other systems and lab equipment, so “we spend less time double-handling data and can complete tasks faster.”

Weilong Wines’ Purchasing Coordinator credits the vintrace app to improved stocktake and inventory, while the Lab Technician attributes vintrace’s ability to integrate with their analytical equipment to reduced data entry. “We only hire one permanent Lab Technician who manages all the vintage analysis on her own and still has spare time,” Aaron proclaimed. 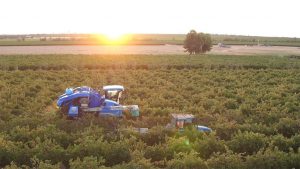 With five full-time cellar staff managing a 20,000-tonne facility and more than 200 tanks, Aaron and his team must be meticulously well coordinated. “vintrace is a crucial component of being able to plan as well as we do during this phase of rapid growth,” said Aaron. Weilong Wines continues to expand the Mildura site with grand plans of reaching 120,000-tonne capacity, making it one of the largest wineries in Australia.

“Being well-organised leads to happier staff, increased productivity and reduced staff turnover,” Aaron added when asked about the intangible benefits of vintrace. “I wouldn’t accept any other system. In my line of work, it’s not uncommon to receive job offers from other wineries, but I’ve actually turned down an opportunity in the past largely because they don’t use vintrace. The extra money was not worth the pain.”

“I wouldn’t accept any other system. I’ve actually turned down a job opportunity in the past largely because they didn’t use vintrace. The extra money was not worth the pain.”

Learn how vintrace can help you